Australia has a lot to offer to an international student. It is considered as an important education destination for students after USA and UK. The costs here are comparatively more affordable i.e. the tuition and cost of living in Australia are low compared to US or UK. Australia has a very large student population, driven here to study and get internationally recognized certificates and degrees. The study abroad courses for international students offered here are enormous and rare, hence  students are offered ample choices for study as per requirement.

The teaching in Australian universities is also acknowledged as superb and it is often quicker to include the findings produced by research activities. This research activity sees the country as a world leader in several important fields, from telecommunications to biological sciences, medicine, cultural studies, economic development, tourism and a range of subjects too long to list here. In almost every measure of quality, including those done by organisations such as UNESCO or the Association of Commonwealth Universities, of the country is classed as excellent.

Cost of study and living in Australia

The standard of living in Australia is amongst that of the highest countries. A foreign student living in Australia has to pay for anything between AUS$ 16000 – AUS$ 20000 as living expenses which include food, accommodation, clothing, local transport, telephone, gas/electricity, stationery, and entertainment in each year of study. However, this varies significantly by location and lifestyle.

Overseas student health cover:- Australia has a special system of health cover insurance for international students called Overseas Student Health Cover (OSHC). This is arranged by the institution when a student arrives in Australia. It is not applicable to students doing a course for les than three months. The premium starts from AUS$ 75 for a cover of upto AUS$ 350-AUS$370 per year. 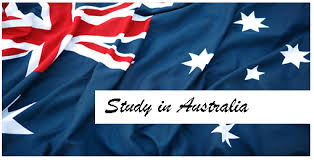 Admission procedure for study in Australia

Following is the eligibility criteria for Study in Australia for MBA, engineering, bachelors, masters and phd programs for getting admission into australian universities:
You need to have completed 12 years of elementary and secondary education.An applicant can either pursue a two-year associate degree like an Associate of Science (AS) or a four year degree like a Bachelor of Science (BS). Along with the required a test the TOEFL or the IELTS needs to be taken to fulfill  English proficiency requirements.

The student also  has to submit his or her statement of scores in exams of their last institute  or a certificate, degree, transcripts which ever applicable as per country. Also, the IELTS scores attached with the application form which can be sent directly to the university or through an agent.