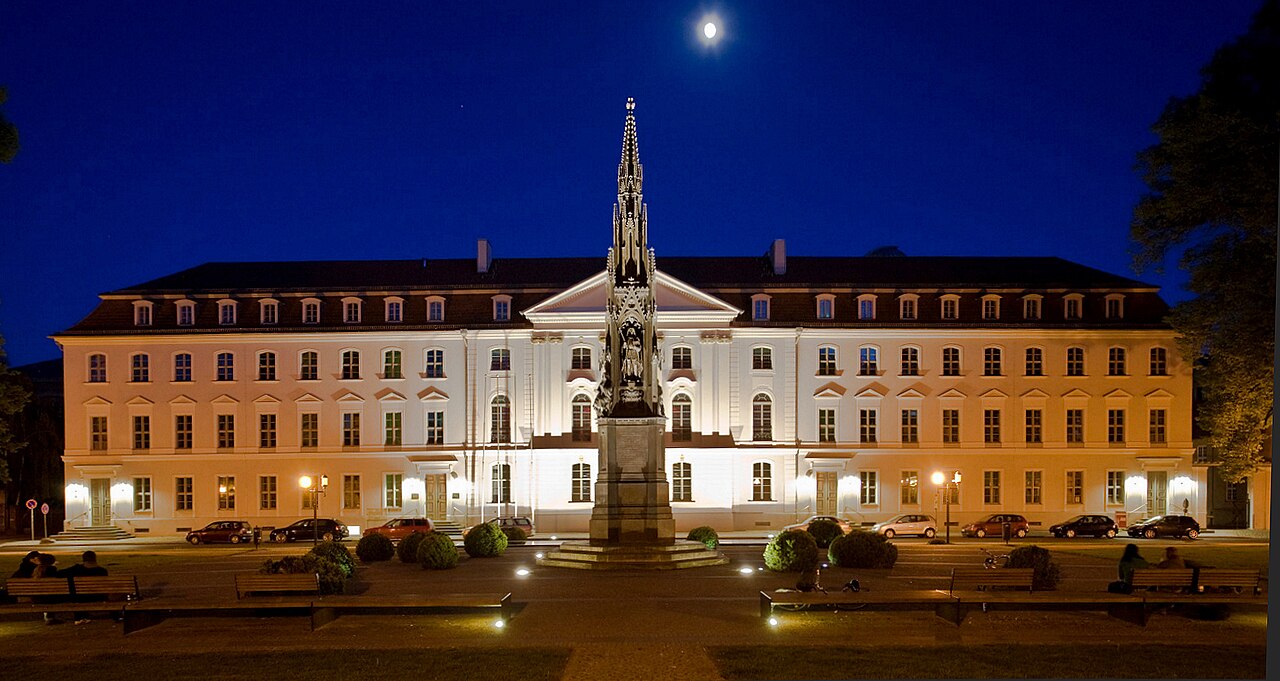 In Germany, there are hundreds of universities  throughout the country which have free or very low-fee tuition programs available for international students. Whether you want to study Engineering, Medicine, Architecture, or Business, Germany is the place to be.

Benefit from a high quality educational system to help you advance in your career, learn a new language by making new friends and socializing with other students, and gain an amazing life experience to remember for years to come by studying and living as a foreign student in Germany.

Combining high quality schooling with a distinctive cultural experience living in Germany is the main reason why young people from all around the world come to Germany.

Public universities in Germany are funded by the federal states and do not charge tuition fees. However, all enrolled students do have to pay a semester fee (Semesterbeitrag). This fee consists of an administrative fee for the university (only in some of the states), a fee for Studentenwerk, (The Studentenwerk (plural: Studentenwerke) or Studierendenwerk is a state-run non-profit organization for student affairs in Germany. Each student affairs i is organized at the local level so that it covers one or more universities. The umbrella organization for the 58 local student affairs is the German National Association for Student Affairs (Deutsches Studentenwerk – DSW), which was founded in 1921.) student affairs i provide public services for the economic, social, medical and cultural support for students enrolled at German universities. In particular, they run university cafeterias, dormitories, and provide the BAföG program to finance studies with grants and loans. The national association includes multiple stakeholders of German society and collaborates with other students’ affairs organizations worldwide.

which is a statutory student affairs organization, a fee for the university’s AStA (Allgemeiner Studentenausschuss, students’ government) and Studentenschaft (students’ union), at many universities a fee for public transportation, and possibly more fees as decided by the university’s students’ parliament (e.g., for a cooperation with a local theater granting free entry for students). Summed up, the semester fee usually ranges between €150 and €350.

In 2005, the German Federal Constitutional Court ruled that a federal law prohibiting tuition fees was unconstitutional, on the grounds that education is the sole responsibility of the states. Following this ruling, seven federal states introduced tuition fees of €500 per semester in 2006 and 2007. Due to massive student protests and a citizens’ initiative which collected 70,000 signatures against tuition fees, the government of Hesse was the first to reverse course before the state election in 2008; other state governments soon followed. Several parties which spoke out for tuition fees lost state elections. Bavaria in 2013 and Lower Saxony in 2014 were the last states to abolish tuition fees.

Since 1998, all German states had introduced tuition fees for long-time students (Langzeitstudiengebühren) of €500 up to €900 per semester. These fees are required for students who study substantially longer than the standard period of study (Regelstudienzeit), which is a defined number of semesters for each degree program. Even after the abolition of general tuition fees, tuition fees for long-time students remain in six states. Additionally, universities may charge tuition fees for so called non-consecutive master’s degree programs, which do not build directly on a bachelor’s degree, such as a Master of Business Administration.

With much controversy, the state of Baden-Württemberg has reintroduced tuition fees at public universities starting in 2017. From autumn 2017, students who are not citizens of an EU/EEA member state are expected to pay €1,500 per semester. Students who enrol for their second degree in Germany are expected to pay €650 per semester regardless of their country of origin. Although heavily criticized in Germany, the amount is considered below-average in comparison with other European countries.

There are university-sponsored scholarships in Germany and a number of private and public institutions award scholarships—usually to cover living costs and books. There is a state-funded study loan programme, called BAföG (Bundesausbildungsförderungsgesetz, “Federal Education Aid Act”). It ensures that less wealthy students can receive up to €735 per month for the standard period of study if they or their parents cannot afford all of the costs involved with studying. Furthermore, students need to have a prospect of remaining in Germany to be eligible; this includes German and EU citizens, but often also long-term residents of other countries. Part (typically half) of this money is an interest-free loan that is later repaid, with the other half considered a free grant, and the amount to be repaid is capped at €10,000. Currently, around a quarter of all students in Germany receive financial support via BAföG.

For international students there are different approaches to get a full scholarship or a funding of their studies. To be able to get a scholarship a successful application is mandatory. It can be submitted upon arrival in Germany as well as after arrival. But due to the fact that many scholarships are only available to students which are already studying, the chances of an acceptance are limited for applicants from abroad. Therefore, many foreign students have to work in order to finance their studies.

Although, famous for its world class educational system and top ranking universities, the educational system of Germany is experiencing continuous changes and reforms. Among other reforms undertaken in the last years was also the reorganization of the Gymnasium. The nine year long education was changed into an eight-year education to get the Abitur.

Furthermore, the academic system has now changed since the recommendations of the Bologna Declaration are being applied as part of the educational reform. The degrees obtained are now called Bachelor and Master thus replacing all of the traditional “Diplom” and “Magister Artium” programs. This has been undertaken in order to increase the global employability of students from Germany.

Students with the intention to study in Germany are required to possess the graduate degree Abitur or “Abi”, which is received after graduation from the gymnasium. Meanwhile, international students must show a similar graduate degree.

So far, the institutions in charge of the educational system in Germany have not been able to build a central organization for application and award of university places. As a result of which the applications still need to be sent to every university or advanced technical college. The admission requirements are also defined by the universities therefore, different universities can have different requirements for the same subjects.

About the Students in German Universities

Since the end of World War II, the number of young people entering a university has more than tripled in Germany, but university attendance is still lower than that of many other European nations. This can be explained with the dual education system with its strong emphasis on apprenticeships and vocational schools. Many jobs which do require an academic degree in other countries (such as nursing) require completed vocational training instead in Germany.

The rate of university graduates varies by federal state. The number is the highest in Berlin and the lowest in Schleswig-Holstein. Similarly, the ratio of school graduates with university entrance qualification varies by state between 38% and 64%.

The organizational structure of German universities goes back to the university model introduced by Wilhelm von Humboldt in the early 19th century, which identifies the unity of teaching and research as well as academic freedom as ideals. This model lead to the foundation of Humboldt University of Berlin and influenced the higher education systems of numerous countries. Some critics argue that nowadays German universities have a rather unbalanced focus, more on education and less on research.

At German universities, students enroll for a specific program of study (Studiengang). During their studies, students can usually choose freely from all courses offered at the university. However, all bachelor’s degree programs require a number of particular compulsory courses and all degree programs require a minimum number of credits that must be earned in the core field of the program of study. It is not uncommon to spend longer than the regular period of study (Regelstudienzeit) at university. There are no fixed classes of students who study and graduate together. Students can change universities according to their interests and the strengths of each university. Sometimes students attend multiple different universities over the course of their studies. This mobility means that at German universities there is a freedom and individuality unknown in the USA, the UK, or France. Professors also choose their subjects for research and teaching freely. This academic freedom is laid down in the German constitution.

Since German universities do not offer accommodation or meals, students are expected to organize and pay for board and lodging themselves. Inexpensive places in dormitories are available fromstudent affairs ia statutory non-profit organization for student affairs. However, there are only enough places for a fraction of students. student affairs i also runs canteens and cafés on campuses, which are similarly affordable. Other common housing options include renting a private room or apartment as well as living together with one or more roommates to form a Wohngemeinschaft (often abbreviated WG). Furthermore, many university students continue to live with their parents. One third to one half of the students works to make a little extra money, often resulting in a longer stay at university.

Some of the Academic Degrees Offered in Germany

Recently, the implementation of the Bologna Declaration introduced bachelor’s and master’s degrees as well as ECTS credits to the German higher education system. Previously, universities conferred Diplomas and Magister degrees depending on the field of study, which usually took 4–6 years. These were the only degrees below the doctorate. In the majority of subjects, students can only study for bachelors and master’s degrees, as Diploma or Magister courses do not accept new enrollments. However, a few Diploma courses still prevail. The standard period of study is usually three years (six semesters, with 180 ECTS points) for bachelor’s degrees and two years (four semesters, 120 ECTS) for master’s degrees. The graduate degrees from universities are accepted and esteemed worldwide. The education at German universities is considered as a good one. The first graduate degree can be obtained after six to eight terms and is called Bachelor
Read more at following Bologna degrees are common in Germany:

In addition, there are courses leading to the Staatsexamen (state examination). These did usually not transition to bachelor’s and master’s degrees. For future doctors, dentists, veterinarians, pharmacists, and lawyers, the is required to be allowed to work in their profession. For teachers, judges, and public prosecutors, it is the required degree for working in civil service. Students usually study at university for 4–8 years before they take the First state examination. Afterwards, they go on to work in their future jobs for one or two years (depending on subject and state), before they are able to take the Second state examination, which tests their practical abilities. While it is not an academic degree formally, the First is equivalent to a master’s degree and qualifies for doctoral studies. On request, some universities bestow an additional academic degree (e.g., Diplom-Jurist or Magister iuris) on students who have passed First state examination.

The highest German academic degree is the doctorate. Each doctoral degree has a particular designation in Latin (except for engineering, where the designation is in German), which signifies in which field the doctorate is conferred in. The doctorate is indicated before the name in abbreviated form, e.g., Dr. rer. nat. Max Mustermann (for a doctor in natural sciences). The prefix “Dr.” is used for addressing, for example in formal letters. Outside of the academic context, however, the designation is usually dropped.

While it is not an academic degree formally, the Habilitation is a higher, post-doctoral academic qualification for teaching independently at universities. It is indicated by appending “habil.” after the designation of the doctorate, e.g., Dr. rer. nat. habil. Max Mustermann. The holder of a Habilitation may work as Privatdozent.